David, a former world champion in Tae Kwondo, has been running a Martial Arts School, where he has passed down his knowledge to hundreds of students, whether they are training to be the next world champion, or just learn a bit of confidence and self-defence. As a few students were on the cusp of becoming black belts, he had lately he’d been thinking about putting on a public display to showcase the students’ work and to have a formal ceremony to award the students their belts. But with so much to organise, David needed help if he wanted to feed all his hardworking students and all their friends and family who’d come along to support them. 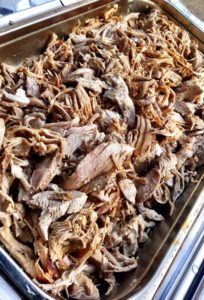 Luckily his wisdom brought him to us at Hog Roast Lyme Regis. We showed him our range of hog roast machines and talked through their capabilities. He was impressed by the Platinum because of its ability to cook two whole pigs, but in the end he decided that the Titan model would be enough. We also gave him a taste of one of our whole roasted pigs. He was hooked after the first bite of the tender hog and insisted on serving it at his ceremony – this is food fit for warriors!

On the day of the ceremony, when the team at Hog Roast Lyme Regis had finished setting up, they were able to watch the wonderful display of high flying kicks, spinning nun-chucks and splintering wood. After the black belts were awarded with their honours, the guests moved through to the dining area were the roasted hog was crackling and its aroma wafting through the air. And quickly, the queues formed.

Accompanying the succulent meat were freshly baked bread rolls and a selection of sauces. The warriors and their friends were delighted with how fresh and tasty the hog roast was and everybody came up for seconds. Dave was happy that the ceremony had gone so smoothly and thanked the team at Hog Roast Lyme Regis for helping to make everything perfect for his hardworking students.